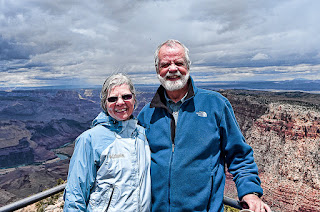 My name is Edward K. Eckert and for many years I was a member of the history department at St. Bonaventure University, first as a major (1961-1965) and then as a faculty member (1971-2005). Technically I still am a faculty member carrying the lifetime title of professor emeritus. The best part of being professor emeritus is that I do not have to do anything. No more classes to teach, meetings to attend, or courses to prepare; the bad side, of course, is no more salary. I am a retired member of the department, but keep in touch by maintaining a St. Bonaventure University email address (eeckert@sbu.edu), following the history department’s newsletter and blog, and, whenever possible, watching the Bonnies play basketball.

Retired I get to do what I want to do pretty much when I want to do it. This spring my wife, Linda, and I crossed the United States in our RV camper for the fourth time. It took us five weeks to travel from our current home in Ocean City, Maryland to the California coast. Each time we cross the country we pick out an area to explore. This year we visited National Parks in New Mexico and Arizona. We are especially interested in the early Indian pueblo cultures in the area. While serving as Academic Vice President at Bona’s, I attended a meeting of academic vice presidents in Santa Fe, New Mexico. While there I took time to go to Bandelier National Park to see the ancient ruins of the pueblo (town) people. I was fascinated by their architecture, their ability to survive, and later learned that they were part of a very large culture extending from northern Mexico to Colorado today. Since there are no extant records—oral or written—we’ll probably never know their history. Yet their masonry is fantastic, we know that they traded items with other native-Americans from the California coast to the mid-continent, and we have determined that they had mostly disappeared shortly before the Spanish arrived in the area. I have read about and studied the “Anasazi,” a name that has some politically correct problems today, to prepare for our visit to the national parks. Also, since we had never seen the Grand Canyon because we wanted to reserve enough time to appreciate it, we spent a week hiking trails (not all the way to the bottom) and enjoying its awesome vistas.
Since retirement I have been working on a history of St. Bonaventure University, which has been in the hands of my editor for nearly three years. It was to be three separate projects but I had difficulty separating each. Institutional histories are like family histories. Most are written for family members. They tend to be kind and positive. Photos and stories about the past are included to share at family get-togethers for Thanksgivings, weddings, and especially funerals. They are written for all members of the family to enjoy. That portion of Bona’s history appeared last spring entitled The Good Journey. Progress on my manuscript was moving along so slowly that Sr. Margaret suggested that we ask the McCarthy family to help me complete the story. Those of you from Buffalo certainly know the stellar writings of Bob McCarthy in The Buffalo News and may know his wife Ann and son Dan. All were excellent students—Bob was one of my own—and all are journalism alums. They did a splendid job finishing the history and I am delighted to learn it has been a success. Did you know that you could find it for sale at Amazon.com?
The remaining projects are a more scholarly history of the university set in the scene of American higher education and a walking tour of campus. To take the family history analogy a step further, the scholarly history, entitled “The Sixth Way,” places St. Bonaventure into the local, national, and international histories of the time. Like all families—continuing the analogy—Bona’s is unique, but since it is also a family, it has common elements shared by almost any other family. In this history I hope to show St. Bonaventure’s uniqueness while placing into its time and culture. The third project was to be a walking tour of the campus. I envision a pamphlet with photos and brief comments on the buildings, places and people standing where the visitor is today. It was something the bookstore could sell for a reasonable price and be kept as a souvenir for campus visitors. Our archivist Dennis Frank has told me that he has worked with students on the same idea, but that it remains to be finished; perhaps you know someone who would like to work on this project with Mr. Frank and me.
Hopefully, you have enjoyed this blog. In future postings I intend to briefly describe major periods of Bona’s history so you as family members will see how very unique our university is, yet at the same time, how common were its problems and experiences.

pax et bonum
Posted by Edward Eckert at 10:03 AM