Notes from a Summer Internship by History Major Kevin Yehl 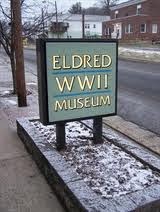 When I decided to take part in a summer internship this year, I considered several different local organizations where I felt I could gain experience and further my understanding of history. Initially, I planned on looking for an internship where I could learn about the local history of Olean, New York. I felt this would be interesting because, for such a small town, Olean has an incredibly diverse past. While that would have been interesting, I ended up taking an internship at the Eldred World War II Museum in Eldred, Pennsylvania instead. I had been to the museum as a child and remembered how impressed I had been even at a young age.

I was surprised to find that there was an interesting story about how the museum had come to be, which started over sixty years ago. Initially, the museum opened in recognition of the men and women who worked at or had a part in creating the National Munitions Plant #1. The man who opened the museum and continues to fund it, Tim Roudebush, had a particular interest in its creation because it was his father, George M. Roudebush, who was the lawyer that secured the land and contract for the munitions plant to be built at the onset of World War II.

Prior to America’s entry into the war, Great Britain hired George M. Roudebush to find a suitable place for a munitions plant to help further their war effort. After looking at many different places, Roudebush settled on Eldred, Pennsylvania for several reasons. Due to Eldred’s geographic position, it was far enough inland that it would be untouchable by the Germans. Also, there were already railroads in place at the time, making it easy to transfer finished munitions to the coast and on to Great Britain. Finally, Eldred was already the home of a factory in which explosives were produced for use in civilian oil fields, which made for an easy conversion into military munitions.


Soon after the contract was written, the original explosives plant was converted into National Munitions Plant #1, and 1,500 employees began producing large amounts of mortar rounds, smoke rounds, and brass fuses for the British war effort. Shortly after, the plant also began supplying the American war effort. At this point, the plant mostly produced thermite grenades and incendiary bombs.

George M. Roudebush’s son, Tim Roudebush, always took great pride in his father’s role in the war effort. When he found himself with the means to do so, he created the museum with his own money to honor his father and those who had worked the munitions plant. He opened the museum on Memorial Day in 1996. Initially, the museum was only one room and focused entirely on the National Munitions Plant #1, but within a few years it expanded twice and eventually focused primarily on the actual fighting that took place during the war. Over the years, it has grown into a World-class museum in a town of less than five hundred people.
Upon starting my internship, I was glad to find that the museum staff expected me to jump right into its daily workings. During the tour they gave me on my first day, I realized that in the decade since I had last been there, it had changed immensely. It had gone from a one room display focusing on the munitions plant to an entire building filled with displays on the fighting in the Atlantic Ocean, Pacific Theater, European Theater, African Theater, the Eastern Front, China/ Burma/ India (CBI), and the Holocaust. They explained to me that my tasks would include the accessioning of donated artifacts, greeting and speaking with visitors as they entered the museum, giving tours, and interviewing veterans who wished to discuss their wartime experiences. 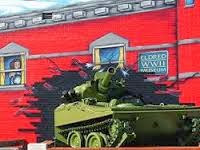 Interviewing and documenting the stories of veterans was one thing that the museum does that I find particularly important and necessary. For several decades after the war, most veterans were hesitant to share their experiences with anyone besides their fellow veterans. While this is still true of many, there are increasing numbers of veterans who wish to share their story with anyone who has a genuine interest in hearing it. This seems to be a way for some of them to finally cope with the difficult things they had seen during their time at war. As one man who fought in the Battle of the Bulge told me, “I am just trying to find a way to forgive myself for all the men that I have killed”. Thanks to the efforts of the employees at the museum and the willingness of veterans to speak about their experiences, there are now over four thousand veteran statements on file at the museum.

I also found that the accessioning of donated artifacts was very interesting. For the first time in my life, I was able to hold incredible artifacts in my hands that had been used during World War II. It was somewhat odd to find myself staring down the sights of a Japanese Arisoka rifle or a M1 Garand. Because of the nature of World War II, some of the artifacts at the museum were more difficult than others to see. One artifact sticks out in my mind in particular. A woman, whose uncle had recently passed away, brought in a lamp that he had taken from a concentration camp after his unit had liberated it. The other employees and myself were startled to see that the lampshade was made out of the skin of a Jewish Holocaust victim. While we accepted the lamp, the directors are still trying to figure out a way to display it in a way that is tasteful as well trying to avoid scaring the visitors.

After my first day at the museum, I began giving tours to local groups. I gave tours to adults in their fifties who were interested to learn about the war that their parents had helped to win. I gave tours to children and their parents who knew very little about World War II but showed a genuine interest in the subject and always left with a feeling of gratitude for those who had fought it. In my opinion, giving tours and teaching others about history is the most important thing a museum can do, because, as they say, “He who does not remember the past is doomed to repeat it”.

Probably the most worthwhile experience I had while working at the museum was my interaction with the veterans who had fought in World War II. After a short time, they almost always opened up to me about their experiences during the war. Many of them wanted to know about my experiences while serving in Afghanistan as well. While I am proud of what I did serving overseas, it was incredibly humbling to compare my stories to those of men who had stormed the beaches of Normandy or any other battle of World War II.

Overall, my internship at the Eldred World War II Museum was very beneficial. It helped me to become more confident in my knowledge of World War II as well as showed me an example of what someone who majors in history can do after graduation.
Posted by Maddalena Marinari at 5:02 PM