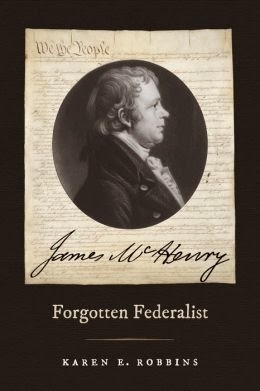 Robbins, of Olean, will sign copies of “Forgotten Federalist” from 5 to 7 p.m. outside the SBU Bookstore in the Reilly Center.

Released Nov. 15, “Forgotten Federalist” is the first modern biography of James McHenry, a Scots-Irish immigrant determined to make something of his life. Trained as a physician, he joined the American Revolution when war broke out. He then switched to a more military role, serving on the staffs of George Washington and Lafayette. He entered government after the war and served in the Maryland Senate and in the Continental Congress.

As Maryland’s representative at the Constitutional Convention, McHenry helped to add the ex post facto clause to the Constitution and worked to increase free trade among the states.


As secretary of war, McHenry remained loyal to Washington, under whom he established a regimental framework for the Army that lasted well into the 19th century. Upon becoming president, John Adams retained McHenry, but Adams began to believe McHenry was in league with other Hamiltonian Federalists who wished to undermine his policies. Thus, when the military buildup for the Quasi-War with France became unpopular, Adams used it as a pretext to request McHenry’s resignation.

Yet Robbins asserts that Adams was mistaken, that the friendship between McHenry and Hamilton had grown sensitive and there was a brief falling out. Moreover, McHenry had asked Hamilton to withdraw his application for second-in-command of the New Army being raised.

Nonetheless, Adams’ misperception ended McHenry’s career, and he has remained an obscure historical figure ever since — until now.

“‘Forgotten Federalist’ is a welcome addition to the literature on the Revolution and early American republic, rescuing a misunderstood patriot from undeserved obscurity. Her fresh and fair-minded account of McHenry’s career as John Adams’s secretary of war is a particularly notable contribution to our understanding of these critically important years,” said Peter S. Onuf, author of “Jefferson’s Empire: The Language of American Nationhood.”

Robbins received her doctorate from Columbia University and is the recipient of two grants from the New York Council for the Humanities to commemorate the Constitution and the Bill of Rights.


About the University: The nation’s first Franciscan university, St. Bonaventure University cultivates graduates who are confident and creative communicators, collaborative leaders and team members, and innovative problem solvers who are respectful of themselves, others, and the diverse world around them. We are establishing pathways to internships, graduate schools and careers in the context of our renowned liberal arts tradition. Our students are becoming extraordinary.

Posted by Phillip Payne at 5:27 AM