As a history student, it goes without saying that I’m passionate about learning about the past.  I have a particular appreciation for American history and the history of the Catholic Church, and soak up even the tiniest morsels and tidbits of the two with a Faustian greed.
Sometimes, though, as a student of history it's easy to get caught up in what happened in the past without fully appreciating the fact that events unfolding in the present are themselves incredible.  Sometimes, I feel like I have a tendency to try and view things through the scope of yesterday and fail to soak in the magnitude of the moment.  It’s as if I need to impatiently wait for the time to pass where an event can be stamped with the label of “HISTORY” and placed neatly on the shelf before I can eagerly grab it and tear in.  Recently, however, I was blessed enough to experience something that may have shifted how I view the happenings of the world around me.
Last month, I was blessed enough to go to Washington, DC with a contingent of Bonaventure students to see Pope Francis as he visited the United States.  And oh, was there ever some history.  It was the first time the beloved pontiff visited the United States in his life.  He presided over the canonization Mass of SAINT Junipero Serra, the first time that a figure has been officially recognized as a saint on United States soil (99.9% of canonizations have been in Rome).  He addressed the U.S. Congress, the first time that the auguste political body has seen a religious figure speak to them.  And I had a (comparatively speaking) front-row seat to all of it.  I had a ticket to the Mass as well as to the West Lawn of the White House for the Congressional address.
On the car ride down, all I could think of was how historic this was; how this was going to be a momentous event, one that would be talked about for a very long time after it was over.  I suppose my line of thinking along that line stopped around when I saw Pope Francis drive by for the first time.  Sure, I wasn’t particularly close; I was down the street a few hundred yards from where his motorcade drove by on the way to the Mass while I was standing in a security line.  And yet, I was struck not with the historic nature of it all, not by how this was going to be seen by future generations, not by how I was going to be able to put into words how incredible this was, but by the sheer magnitude of the moment.  I can’t truly put it into words, but for the rest of trip, I saw things through the eyes of an awed and humbled Catholic, not as someone waiting to dissect words or gestures or theorize on the politics behind the address or the visit or the homily.
I was able to live during a historic visit.  But that categorization would come well after I had arrived back at St. Bonaventure. 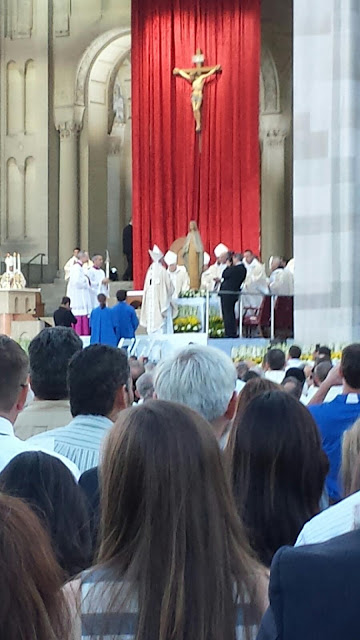 Posted by Christopher Dalton at 5:54 AM