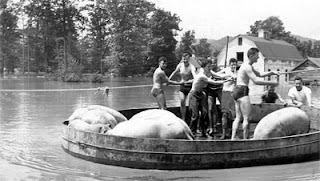 SAVING THE BONAVENTURE PIGS IN 1942

In 1942 flash floods forced St. Bonaventure students and staff to create a makeshift barge in order to rescue the 150 pigs from the barns on campus. Flooding again visited the campus and caused serious damage in 1972. This photo comes from the university's archives and is reprinted in the newly-published book The Good Journey: 150 Years of History at St. Bonaventure University.

History Quiz. These questions, on old and new history, are taken from the History Channel and the New York Times.

2. Starbucks is celebrating its 40th anniversary with a new line of merchandise. Among the items is an $85 T-shirt by designer Alexander Wang that makes you look like:
a) A human-size coffee bean
b) You spilled coffee on yourself
c) The type of person who spends nearly $100 on a T-shirt
d) A barista

3. A new bank opened last week in Florida, the first bank in the US to accept deposits of:
a) Fat from your liposuction procedure, to save for later use
b) Leftovers
c) Florida’s own "Gator buxx" currency
d) Those really big novelty award checks

4. What did the famous gangster Al Capone make most of his money doing?
a) selling alcohol
b) selling cigarettes
c) robbing banks
d) blackmailing celebrities and politicians

5. In which city was the Austrian Archduke Franz Ferdinand assassinated in June 1914?
a) Zagreb
b) Sarajevo
c) Vienna
d) Berlin

6. Which Charles Dickens character still wears her wedding dress years after she was abandoned at the altar?
a) Little Nell
b) Miss Pross
c) Miss Havisham
d) Victoria Islington

7. Which American colony did not send a delegate to the first Continental Congress in 1774?
a) Massachusetts
b) New York
c) Georgia
d) Delaware

The final two questions are not history-related, but they will test your gray matter.

8. The clerk at the butcher shop is five feet ten inches tall and wears size 13 shoes. What does he weigh?

9. What word in the English language is always spelled incorrectly?

Scroll down to find the answers.

History Internships
Every year several students work for a semester or a summer as interns, both on and off campus. These internships bring three academic credits. Last spring several students worked in the Friedsam archives. One of the projects they completed was a web page on the history of the ROTC program on our campus. It can be found at http://web.sbu.edu/friedsam/archives/history/ROTC/rotc_index.htm. Anyone who is interested in an internship should consult with Dr. Phillip G. Payne for information.

History Faculty
Here is the second installment in a series introducing members of the History Department. 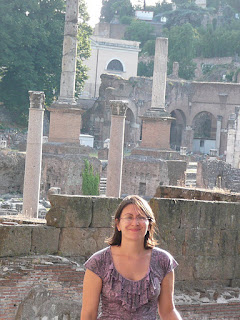 Dr. Marinari during a Visit to See Her Family in Italy

Dr. Marinari joined our department this semester. She was born near Naples in southern Italy. Her interest in American history brought her to this country, where she obtained a Ph.D. at the University of Kansas. While in Kansas she became a rabid fan of the Jayhawks basketball team, but she promises to try to switch her allegiance to the Bonnies. She specializes in twentieth-century US history, especially immigration. Needless to say, the study of Italian immigrants is a particular favorite of hers. She offers courses in a wide range of other topics also. Prior to arriving on our campus she taught at American University in Washington, DC. She has already written several articles and is working on a book entitled Liberty, Restriction, and the Remaking of Italians and Eastern European Jews. Italians are renowned for their love of strong black coffee. Dr. Marinari confesses that she did not become a coffee drinker until she arrived in the US. Italians are also famous for taking their holidays at the seashore in Italy or elsewhere in the Mediterranean. Dr. Marinari, however, did not learn to swim until recently. Swimming won't be so important now that she is at St. Bonaventure. Perhaps some students can teach her to ski this coming winter. 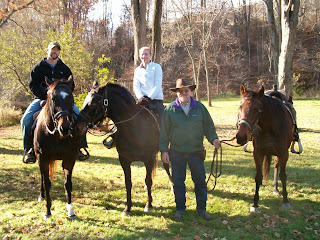 Dr. Schaeper with some Bona students

Dr. Schaeper joined the Bona faculty in 1979 after obtaining his Ph.D. at Ohio State University. He specializes in European history and offers courses on a variety of topics covering several centuries. In the spring of 2011 Yale University Press published his sixth book, Edward Bancroft: Scientist, Author, Spy. Bancroft was well known in the late eighteenth century as a British-American chemist, physician, and novelist. Nowadays he is most famous because he spied for the British in France during the American Revolution. During this past summer the book received favorable reviews in a variety of national publications. One reviewer called it "a perfect biography." (No, Dr. Schaeper did not have to pay the reviewer to write that!) Though Dr. Schaeper is primarily a Europeanist, he has begun work on a new book that will concern America's Founding Fathers. He loves doing research in cities like Paris and London, but he is also perfectly content riding his horses in the beautiful hills near his home. He and his wife Gaye live in Ischua, along with four horses, five cats, and a dozen dogs.


Quiz Answers
1. b. The Warren Buffett Rule, that no billionaire should pay taxes at a lower rate than his or her secretary. Super-rich investor Warren Buffett recently announced that his tax rate is lower than those of people who work in his office, and he said the rich should pay more in taxes.

2. b or c. Wang’s new Starbucks T-shirt features a brown design made to look like spilled coffee. While $85 sounds like a lot for a T-shirt, you did just spend $9 for a cup of coffee.

3. a. The Liquid Gold Center can keep the fat you have removed from your hips during liposuction until you need it injected into your lips.
4. a
5. b
6. c
7. c
8. Meat
9. Incorrectly
Posted by Phillip Payne at 10:16 AM