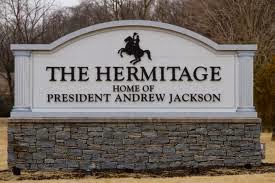 Recently my husband and I took our son to look at Vanderbilt University, where he was considering going to graduate school. It is located in Nashville, TN, and although he has chosen instead to attend Syracuse University, his Dad and I played while he toured the school.

First we went to Andrew Jackson’s plantation, the Hermitage, just about 15-20 minutes east of downtown Nashville. It was very interesting to see, and impressive to me since they actually do incorporate slaves into the experience. Slave cabins survive and you can go inside. They are part of the museum exhibit and of the audio tour. Some of the cabins still had furniture, which was acquired quite late, sometimes after the Civil War when some of the freemen elected to stay.

In this sense it was far more impressive than George Washington’s Mount Vernon. The last time I went to Mt. Vernon they had not been so successful in including slaves into the picture. I will be going there again in the next few years, and I hope this aspect has improved. Someone else I spoke to who had just been to Mt. Vernon last year said that they had not seen much regarding the slaves at all. So the historians at the Hermitage are more sensitive in this regard. The film about Jackson involved some mild whitewashing of the man, but the speaker at the end made a point of saying that Jackson did a good job of representing the people he cared about – the “common man” of the era, whom we know was white and, of course, male. Andrew Jackson and his wife Rachel actually built their big house in their middle-age, and prior to that had lived in a much more modest two floor log cabin. It survives in a one-story incarnation. It was interesting to stand on the ground, look at the cabins in which Jackson and his slaves lived, and try to imagine life as it was then, still frontier when he arrived as a young man. 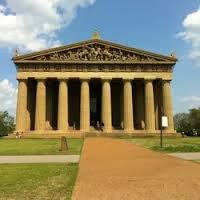 Our next tour was of the Parthenon! Yes, Nashville has built an exact replica (dimensionally) of the Parthenon as it would have looked when it was complete thousands of years ago. It was originally built temporarily for a celebration in the 19th century, then rebuilt in permanent form, and in the 1980s they installed a to-size statue of Athena, painted to look as if she’s made of gold and ivory like the original. It was quite an experience to cross the street from our hotel and see the Parthenon!! It seemed to me very appropriate that they had chosen a Greek temple for their civic celebration. By the early 19th century, the founders’ emphasis on Roman Republican heroes was being supplanted by a popular turn toward Greeks, who invented democracy. It was an intentional symbolic change, the “democratic” rise of the “common man” whom Jackson championed. Is it any wonder that this “new” white land, which would incorporate all white men, chose Greek symbols rather than Roman?
Lastly, we visited the Ryman auditorium, where country music was born. This was interesting also, as it reflects the intensity of religion for this area of the Bible belt. The Ryman actually started as a tabernacle, built for a preacher by a wealthy parishioner who’d been converted from atheism. To make ends meet, they rented out the building one Saturday for a concert – and the rest is history. The auditorium is still filled with carved wooden pews, and the wood to be found everywhere gives the room its special acoustics. There is still stained glass, though in simple block colors. Tours are available of the back stage areas and dressing rooms, where one can see pictures of all the greats.

It was a terrific taste of Nashville, especially since I quite accidentally chose a hotel where, six nights a week, hopeful songwriters perform and hope to be discovered. A nightcap and listening to talented musicians is a great way to end the day.

Remember, wherever you go – history is all around you.

Karen Robbins
Posted by Maddalena Marinari at 5:55 AM