Notes from a Summer Internship by History Major Leah Brownstein 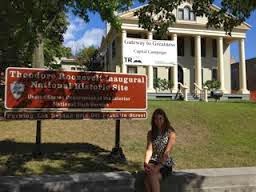 Western New York is gifted with tremendous historical importance exposed through the many societies, museums, and public exhibits. Although there are many educational opportunities available to examine these various historical events, the rich history of Buffalo, New York is often overlooked by the public. Society’s lack of historical knowledge became discouragingly obvious to me as I began volunteering my time at the Theodore Roosevelt Inaugural National Historic Site.

I spent the first three weeks of my internship expanding my knowledge of Theodore Roosevelt as well as of the early 1900’s. I then devoted the following two weeks to understanding, memorizing, and learning how to properly convey an enormous amount of information. After doing so and becoming familiar with the structure of the site itself, I began giving guiding tours as an official docent. My first day as a docent I nervously sat behind the circulation desk along with two other very experienced volunteers. We alternated leading tour groups through the exhibits. 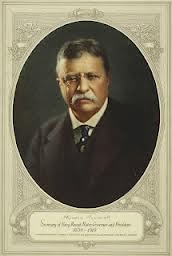 Before beginning each tour, I was instructed to document where each tourist was visiting from. I was taken back as I realized at the end of my first day that not one visitor was from the state of New York. This quickly became a trend in my documentations. Most of the history enthusiasts that visited the TR Site were traveling cross-country to tour historic homes. These visitors with their National Parks Pass in hand were expectingly hard to impress. I began to realize as the tours went on that I no longer was the tour guide, but I often became the visitor myself. It was evident that in order to provide this specific audience with a tour filled with facts beyond what they already knew, I needed to do even further research on Theodore Roosevelt outside of my internship.

What began as “homework” for my internship developed into a hobby and interest in the 1900’s and Theodore Roosevelt. Not only did I acquire a tremendous amount of knowledge from the Site’s visitors, books, and documents, I became genuinely interested and therefore more involved in the work I was doing for the TR site. I believe that my willingness to learn and enthusiasm contributed greatly to the Theodore Roosevelt Inaugural National Historic Site, as the Site positively influenced my historical education. This experience has evoked a great passion and appreciation for the National Parks and Buffalo’s Historical Society. I will definitely continue to volunteer my time at the Theodore Roosevelt Inaugural National Historic Site and continue to expand my knowledge of the historical importance of Buffalo.
Posted by Maddalena Marinari at 11:01 AM