Gabriel over the White House 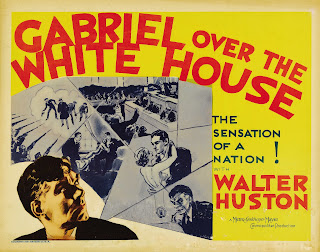 I've been owing the History blog an entry for some time so it seems appropriate to mention Gabriel over the White House. We are teaching the film in History 429: 20th Century America in Film and History. The 1933 film appeared just after Franklin Roosevelt's Inauguration (March 1933) and is a call for a fascist style dictatorship that would push aside the inefficiencies of democracy to fix the nation's woes.


The film was a hit in 1933 but then disappeared until recently when it was shown on TCM and released on dvd. The film has extra relevancy for me. In the film, the president is transformed by a near-death experience from a party hack to a Mussolini style dictator. The party-hack president is based on Warren Harding. I looked for a copy of the film while writing my book on Harding's public memory and could not find it.

The film resonates today with our own economic woes and ideological partisan charges of plans to impose a socialist or fascist dictatorship on the country.
Posted by Phillip Payne at 5:47 AM