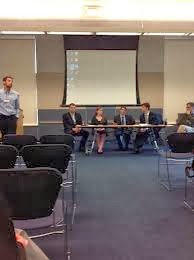 Senior History major Jason Mahar presented a paper entitled "Albert Gallatin: Visionary Clouded by Debt" at the regional conference of Phi Alpha Theta, the national history honor society, on Saturday, April 20. The event was held at Ramapo College in New Jersey and featured a day of the best student history papers from colleges in the northeast.

Posted by Maddalena Marinari at 7:57 AM No comments:

Jared Kausner graduated from SBU in 2008 with BA in History as well as a commission as a Second Lieutenant that he received through the SBU ROTC program.  After leaving Bonaventure, Jared spent four years working with the Army in various assignments, including a combat tour to Afghanistan.  Throughout his time in the Army, Jared was always using the analytical skills that the SBU History Department had taught him.  The ability to research effectively, come to sound conclusions, and cite examples are all valuable skills that are unique to students of History and were critical to Jared’s success in the military.  In late 2012, Jared reverted to the Army National Guard where he continues to serve his country.  In March 2013, Jared returned to St. Bonaventure where he serves as the Assistant Professor of Military Science for the Army ROTC Program.
Posted by Maddalena Marinari at 7:22 PM No comments:

Posted by Maddalena Marinari at 4:08 PM No comments:

On Thursday, April 18, 2013, seven history majors presented their research at the 2013 Arts and Sciences Exposition in Doyle Hall. Congratulations!


Posted by Maddalena Marinari at 12:25 PM No comments: 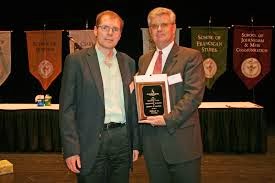 On Tuesday, April 16, 2013, Dr. Phillip Payne, professor of history (left), received an award for Professional Excellence in Research and Publishing from Provost Dr. Michael Fischer. Congratulations!
Posted by Maddalena Marinari at 5:36 AM No comments: 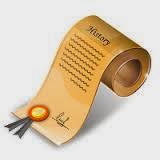 Eight History Majors will present their research at the 2013 Arts & Sciences Exposition at St. Bonaventure University. On Thursday, April 18, a reception will be held in the Trustees Room from 11:30 a.m. to about 1:00 p.m., during which our eight students will stand by their posters and answer questions about their research projects.

On the same day, at 5 p.m., the History Department will initiate six new students into its national honor society, Phi Alpha Theta. The induction ceremony will take place in the Living Room of University Ministries, and there will be a small reception afterward. Please come and support our new members: Shannon Conheady, Harrison Leone, Jason Mahar, Alexandra McCumiskey, and Maria Swieciki.

Posted by Maddalena Marinari at 8:19 AM No comments:

Now that we’re into registration I’d like to plug History 206: Introduction to Public History. Public History is a smorgasbord of the types of history that exists outside the academy. One of the goals of the course is to introduce students to their career options in history and fields related to history. We look at a range of things from the how and why of museum work, historic preservation, history tourism, grant writing and more. What role does the historian play? How does it differ from traditional history? What skills are needed? A second goal is for students to do hands-on projects that will be available for public viewing. We work closely with Dennis Frank in the university archives. Past projects have included oral histories, exhibits on SBU’s history and other stuff. The point is we want to move beyond the paper with an audience of one, the professor, into projects that the university community will enjoy.
Posted by Phillip Payne at 7:22 AM No comments: 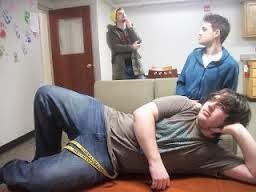 Sure, 8 o’clock in the morning may be early and, yeah, it’s cold more often than not here at St. Bonaventure, but, every Tuesday, three stalwart cohosts rub the sleep from their eyes, guzzle their coffee, gulp down their breakfast sandwiches, and brave the sub-freezing temperatures to bring the “To Be Announced Show” to the world.
While I haven’t had the pleasure to listen to every show aired on WSBU The Buzz, St. Bonaventure’s nationally renowned, student-run radio station, I can say with confidence that the “To Be Announced Show” is the only one on 88.3 FM featuring a major historical component. Not only are two of the three hosts history majors-and proud of it, damn it-but our DJ names, “Kid Charlemagne” and “DJ Boris”, are inspired by historical figures. While we can’t claim to be a solid two-hour block of historical wisdom, we do have to play some music, after all, but we can at the very least say we incorporate a healthy dose of intelligent discussion into our show.

Read more »
Posted by Maddalena Marinari at 1:26 PM No comments: