Notes from a Research Trip to Argentina (Dr. Joel Horowitz)

On August 1, I returned to western New York after a month-long research trip to Buenos Aires.  The Argentina that I saw was in many ways different than the one that I had seen just two years ago on my sabbatical.  The change was not due to living in a different neighborhood of the city of Buenos Aires, since I lived just three blocks from where I had previously stayed. Something had changed. That something was clearly politics, economics, and the atmosphere created by the two. Employment levels remain high (it is difficult to say how high and what they mean since almost everyone will admit, except extraordinarily fervent supporters of the government, that official statistics are worthless), but inflation is also high, at least twenty percent. In peso terms, things are much more expensive than two years ago.
The government’s attempts to do something about inflation and the problems that it brings have so far at least had minimal positive impacts. It has used the tactics of the past which have always failed badly.  It has tried to coerce retailers into freezing prices and made obtaining dollars illegal or at least extraordinarily difficult.  The latter has produced a so called parallel market with an exchange rate that is very different than the official rate. (As of August 7, the official rate was 5.62 pesos per dollar and the parallel rate or “blue” market was 8.56).  The ones who are hurt the worst by this type of inflation are undoubtedly the poor.  The wealthier have ways to save or buy.  One reason why restaurants are jammed every night of the week, besides small kitchens (like in New York City), is that it is difficult to save, so if you have it, you might as well spend it.  One can eat extraordinarily well in Buenos Aires. 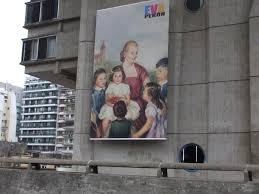 Adding to the sense of unease produced by the economic problems has been a perception of a crime wave.  People are very afraid of crime.  How much is fear of crime and how much is real is more difficult to say.  At least in the city proper (which does not include its working class suburbs that surround it) murder rates by US standards are extraordinarily low.  One hears enough random tales of purse snatchings, stealing of smart phones etc. to think that the fears of this type of activity is real, but how it would compare to the US is more difficult to say. Above or perhaps below all this is a real political divide.  People either hate or love the government of President Cristina Fernández de Kirchner.  One hears stories of families where people have stopped talking to one another because of politics.  A friend of mine, whom I have known for decades, told me that he no longer sees friends he has had since elementary school since they want to talk about politics and then they get very upset when he disagrees.  The political atmosphere is particularly intense since the first round of congressional elections are Sunday August 11.  If the followers of Cristina do well, most people believe that she will have the constitution amended so that she can be re-elected.  She, however, has repeatedly said that she will not try to do so.  The polls are indicating that her followers will not do particularly well but it is a complex situation with many slates running and of course it is a national election.
Why are politics so heated?  In part, it has become so divided because Cristina (as almost everyone refers to her) has developed an extreme style of the traditional Argentine style that sees opposition as disloyal not only to the president but to the country.  She has used almost the full power of the government to back her positions.  She has surrounded herself with yes people and not surprisingly, after ten years of being in power, (four years for her late husband Nestor and now 6 years for Cristina) corruption appears almost everywhere among people close to the government.  Cristina tries to identify herself with Evita Perón and those close to her use every opportunity to display large pictures of Evita.  For example a rather small and nice exhibit about books about Evita has opened in the Biblioteca Nacional (national library). Weeks before the opening, giant pictures of Evita hung from the outside of the library.  The director is a fervent supporter of Cristina. (See accompanying photo).  Similarly Cristina has attempted to project an image of being very close to Pope Francis, including using photographs with the two of them together in campaign posters, although they had an extremely rocky relationship when he was cardinal of Buenos Aires. People who do not like the current government feel excluded and fear that they will feel the weight of the government on them. 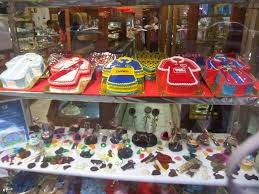 Despite all of this Buenos Aires is a delightful city.  It is full of life and art.  One can eat extraordinarily well, both by buying from the myriad of small and large food store and from restaurants of all types. (See accompanying photograph of a window of a bakery that combines two important features of Argentine life, food and soccer [cakes in the shape and colors of soccer uniforms].) People manage to overcome the challenges that come from difficulty in commuting and the stress of daily life.  The word “stress” (in English) has passed into the vocabulary of the average inhabitant of Buenos Aires.
I spent most of my time, other than hanging out with friends, in the national library and in three archives.  I managed to take almost two thousand pictures of documents, which leaves me many months of research work still to do.  Olean seems very quiet now and I miss Buenos Aires.
Posted by Maddalena Marinari at 10:37 AM