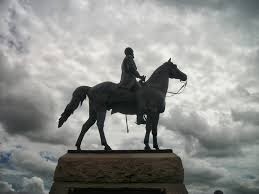 To say that I was “lucky” to be able to be in Gettysburg for the 150th anniversary of the battle would be a tragic understatement. Thanks in large part to my father’s impulsivity, my family and I found ourselves in a sea of amateur historians and over-zealous re-enactors, sweltering under the early summer sun.
Even if the greatest battle in the Western Hemisphere hadn’t occurred there, Gettysburg, Pennsylvania would still be an attractive vacation destination. The bucolic community of 3,000 people is complete with lush, verdant hills, brick sidewalks and a quaint liberal arts university and has a small-town charm that borders on the surreal. The battlefield nested on the town’s southern flank can almost be forgotten.
Until, that is, you get onto Tarrytown Road and head towards the field itself. Soon, placards and statues begin to crop along the roadside. Companies, soldiers and generals are all represented by monuments of varying shapes and sizes, ranging from blocks of granite to larger-than-life representations to temples and obelisks. 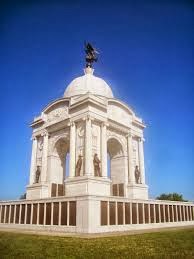 Along the center of the former union lines, opposite the site of Pickett’s charge, stands perhaps the most impressive tribute to an individual solider: a massive statue of General Meade astride his war horse Old Baldy, surveying the long-dormant battlefield. From the base of the colossal bronze general one can see nearly the entire breadth of the field, from both Round Tops down to the Peach Orchard, Devils Den and the Wheatfield and finally up along Confederate Avenue to Seminary Ridge.
The stones and earthworks the Union defenders took cover behind during that massive assault on the third and final day still stand. Standing behind the  imagine the experience of those men, holding fast under withering fire as a howling wall of gray descended upon them.

Ultimately, that connection to history is the truest attraction of Gettysburg. Besides the natural splendor or the Americana charm, the sense of living and experiencing the past is captured in better in this southern Pennsylvania village than perhaps anywhere else. It is one of the few places where, to paraphrase the Great Emancipator himself, the “mystic chords of memory” become much more than mere abstractions and morph very nearly into the tangible. 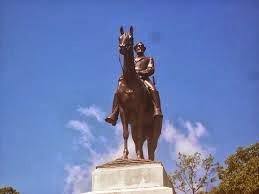 On East Cemetery Hill, where Union troops held the high ground through confederate shell and shot, a statue of General Winfield Scott Hancock (not unlike a miniature version of General Meade) stands in somber silence. It was from against this statue that I watched the dusk sky of July 4th turn to night. Slowly, fireworks from neighboring towns began to burst on the horizon, culminating in a crescendo of color and light. As I witnessed these celebrations of America’s birth from a spot in which a century and half earlier its very existence was in great peril, I could not help but feel the presence of the past.
Posted by Maddalena Marinari at 11:50 AM