The History Club Goes to Buffalo! (by Nick Siciliano) 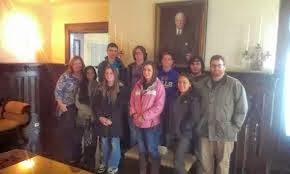 This past Saturday, the St. Bonaventure History Club travelled back in time to the Pan-American Exposition of 1901 in Buffalo, New York. There, among the once-lavish haunts of Delaware Avenue, we played the role of privileged witnesses to the inauguration of the United States 36th president, Theodore Roosevelt.
Roosevelt, one of the nation's most popular and recognizable presidents, was inaugurated at the home of Ansley Wilcox after the tragic assassination of President McKinley at the Exposition. Our visit included a tour of the house, including the sitting room where President Roosevelt took the oath of office, and interactive displays that blended the issues of turn-of-the-century America with modern political debates.
The trip was the first of the club's organized outings for the 2013-2014 academic year. The TR Inaugural Site allowed us to experience the problems that plagued the nation before Roosevelt took office and gain a sense of how the president approached these problems. 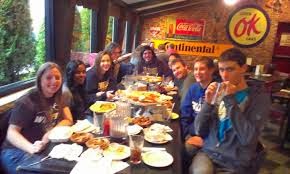 The TR Site was only the first stop on our trip to the Queen City. After our extensive learning of the life, presidency, and legacy of Teddy Roosevelt, we went to replenish ourselves at another historic site. The Anchor Bar, the birthplace of perhaps America’s greatest contribution to the human race--chicken wings--was where we took our freshly filled minds to fill our empty stomachs.
The history club was proud to be able to put together a trip that allowed its members to experience a piece of American history that they otherwise may not have had the opportunity to see. With another semester--with hopefully more cooperative weather--on the horizon, the club is excited to continue to be an active presence in the St. Bonaventure extracurricular community.
Posted by Maddalena Marinari at 12:59 PM