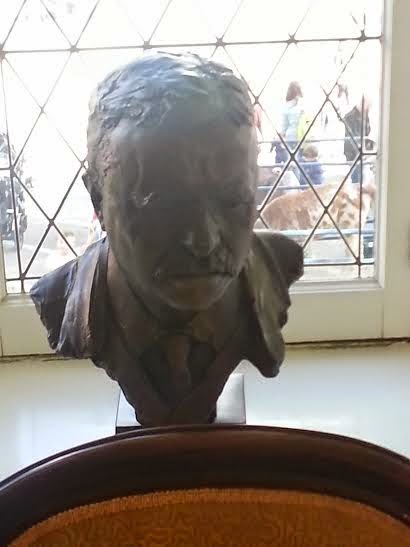 Over fall break, while at home in Buffalo, I was able to visit one of the most impressive, yet overlooked sites in the area’s local history. The Theodore Roosevelt Inauguration National Historic Site is tucked right into one of Buffalo’s busiest and most historic streets, Delaware Avenue, but many people, including myself, have ignored the building on their commute to and from downtown. Because of its immense relevance to American history, however, I decided I had to stop in.

The outside of the building is ornate and well designed, yet a guide later pointed out that publications like The New York Times reported the mansion as “modest” when covering Roosevelt’s inauguration. Keeping in mind that the stretch of Delaware where the museum was located is nicknamed “Millionaire’s Row”, the house certainly paled in size to the other mansions surrounding it. While this certainly contributed to it being overlooked, it did not diminish the history contained on the site.

The museum begins with a room dedicated to exploring the Pan-American Exposition held in Buffalo in 1901, where President McKinley was shot. Buffalo was one of the largest cities in the United States at the time, and millions of people flocked to see this version of the World’s Fair, where exotic foods and new technology were flaunted. This was the first occasion a city used electric lighting to illuminate its streets, and people were so impressed that Buffalo was given the moniker “The City of Light” after Paris. This begin room in the museum captures the whimsy and innovation of the Exposition, offering exhibits on new technology of the time and the type of cultural items on display.

From here, the self-guided tour took me to the spot where Roosevelt was sworn in, and where he made his first executive decisions. Here, the museum provided representations of actual telegraphs sent to Roosevelt. These messages ranged from congratulating the new president to complaints on the pressing issue of the rise of anarchy (President McKinley was shot and killed by an anarchist). These were fun to look through and helped me to recognize public opinion at the time. While in this room, a guide explained that inaugurations done outside of a national capital were extremely rare, with this site being one of the exceptions.

To bookend the tour, the museum sought to set a context for Theodore Roosevelt’s presidency. They explained social, political, and environmental issues that TR tackled in his two terms as president. As well, a whole room was dedicated to photographs of the construction of the Panama Canal. In here, there were plaques explaining living conditions, racial discrimination against native and African-American workers, and new technology used to carry out the project.

While the Theodore Roosevelt Inauguration Site might fade behind other, more prominent, and larger museums in the Buffalo area, it certainly should not be forgotten. It presents and characterizes one of the most influential presidents ever, and boasts a unique piece of inaugural history. While the tour won’t take you long, it offers a lot of information and can be done in less than 2 hours. Information on the site can be found at http://www.nps.gov/thri/index.htm, and tickets and tours can be booked at http://www.trsite.org/.
Posted by Maddalena Marinari at 1:14 PM