Dr. Phillip Payne's book is almost official, at least so far as it is available for pre-order on the Johns Hopkins University Press web page (shameless plug!).
Posted by Phillip Payne at 7:17 AM No comments: 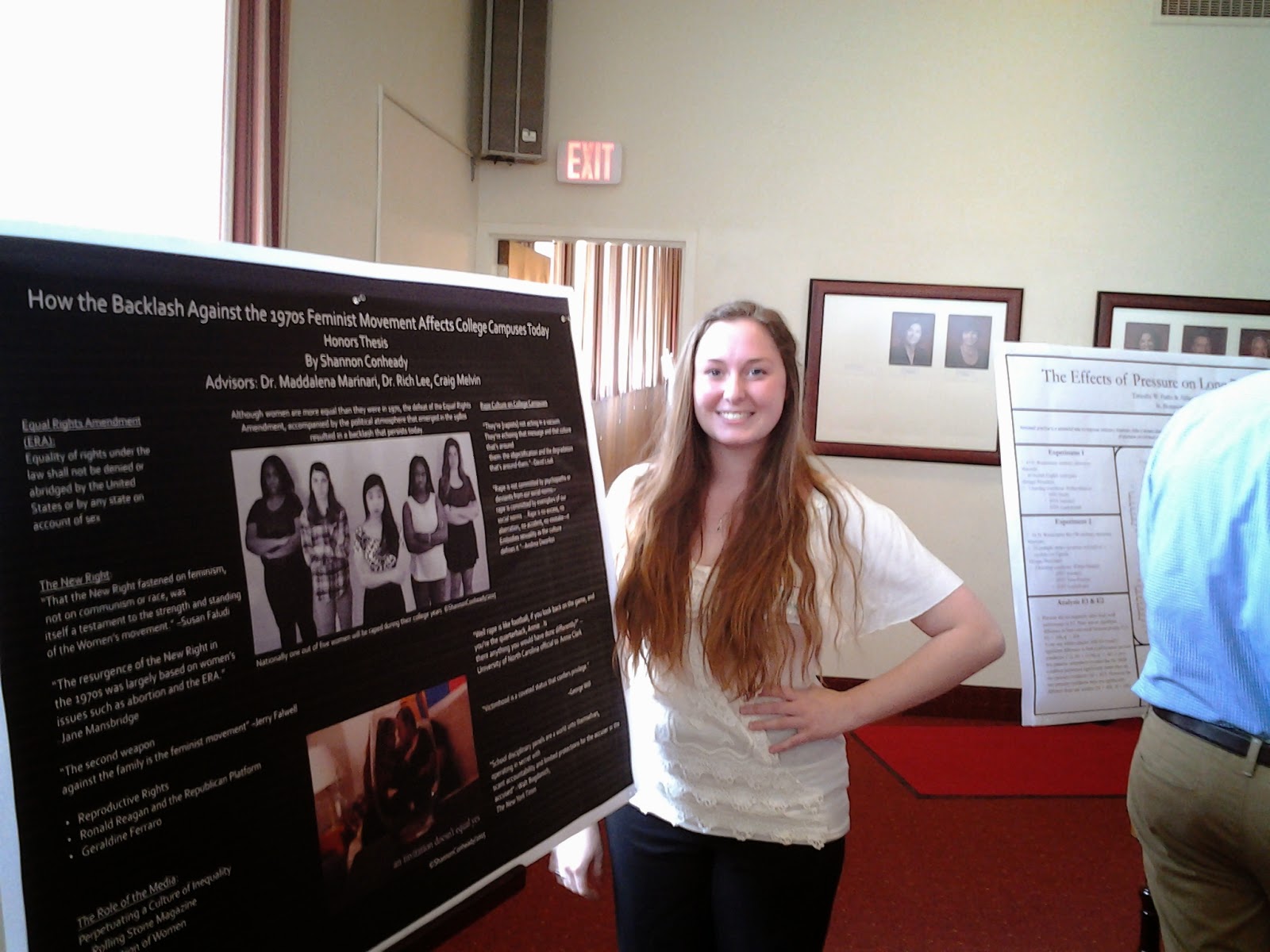 Throughout my last year at Bonaventure, I have been working on my Honors thesis. On Thursday I presented my work at the Arts and Sciences Exposition. The project explores how the backlash against the feminist movement of the 1970s continues to affect college campuses today. In my research, I found a distinct turning point during the late 1970s and early 1980s where this backlash is particularly evident, especially in the defeat of the Equal Rights Amendment and the culture that grew out of that defeat. I looked at how the culture that arose during this time period continues to impact women who have been sexually assaulted on their campuses. It also continues to influence how college handle cases of sexual assault. My project uses two different mediums to explore this persistent backlash, paper and photography. It has been an eye-opening experience to write and explore the beginnings of this problem that is so wide-spread on college campuses throughout this country.
Posted by Phillip Payne at 10:36 AM No comments: 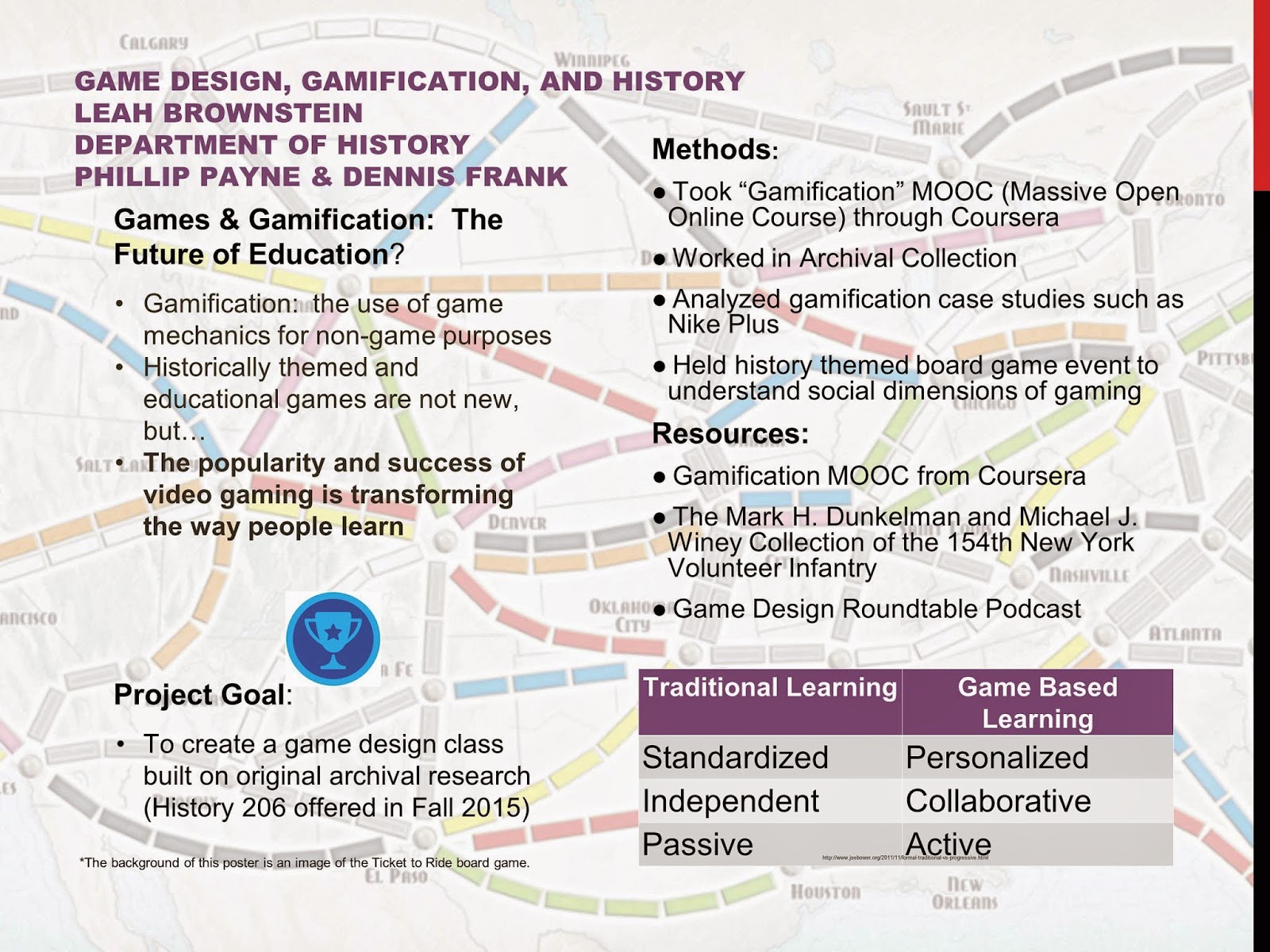 As noted elsewhere on this blog, Leah Brownstein has been working on an independent study on Game Design, Gamification, and History with Phillip Payne and Dennis Frank. Thursday Leah presented her work at the The Arts and Sciences Student Research and Creative Endeavors Exposition. The independent study gave Leah the unique opportunity to help us plan our game design assignment for History 206: Introduction to Public History offered next fall. Games and gamification is exploding in education so we're looking forward to using it the public history class. Leah's insight as a graduating history major proved extremely valuable in the planning process. 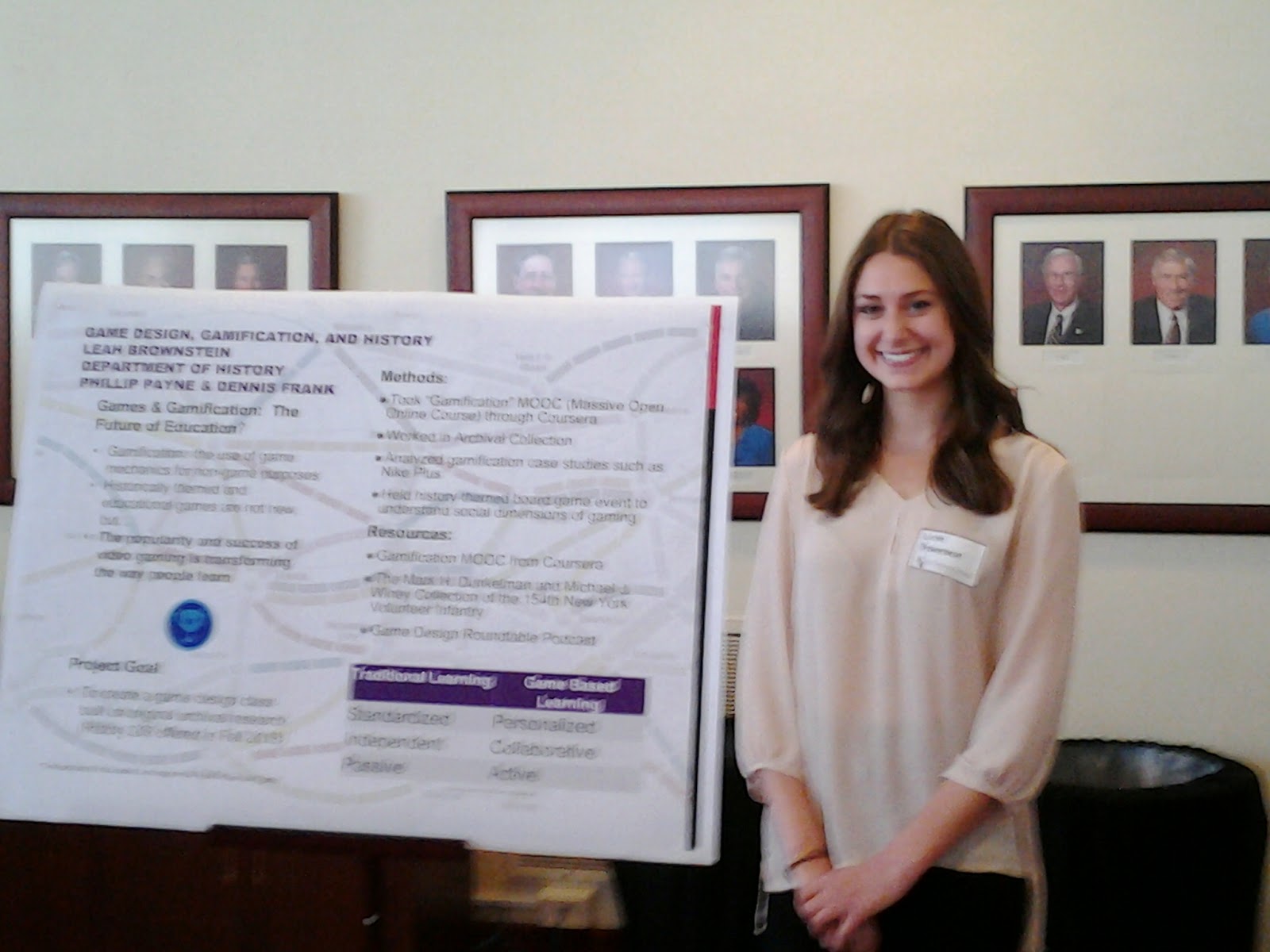 Posted by Phillip Payne at 10:39 AM No comments:

History Majors at the 2015 Arts and Sciences Exposition

St. Bonaventure University will host the 2015 Arts and Sciences Exposition on Thursday, April 23, and Friday, April 24. Several history majors will be there to present their research projects. Come out to support them!

The event, which is open to St. Bonaventure employees and students, will take place in the Doyle Hall Trustees Room and Dining Hall. The exposition features student-made projects from a variety of academic fields including, biology, chemistry, computer science, English, history, mathematics, physics, psychology and visual and performing arts. The student participants will be present to answer questions about their projects during the catered reception from 11:30 a.m. to 1 p.m. Thursday, April 23.
Posted by Maddalena Marinari at 5:31 AM No comments: 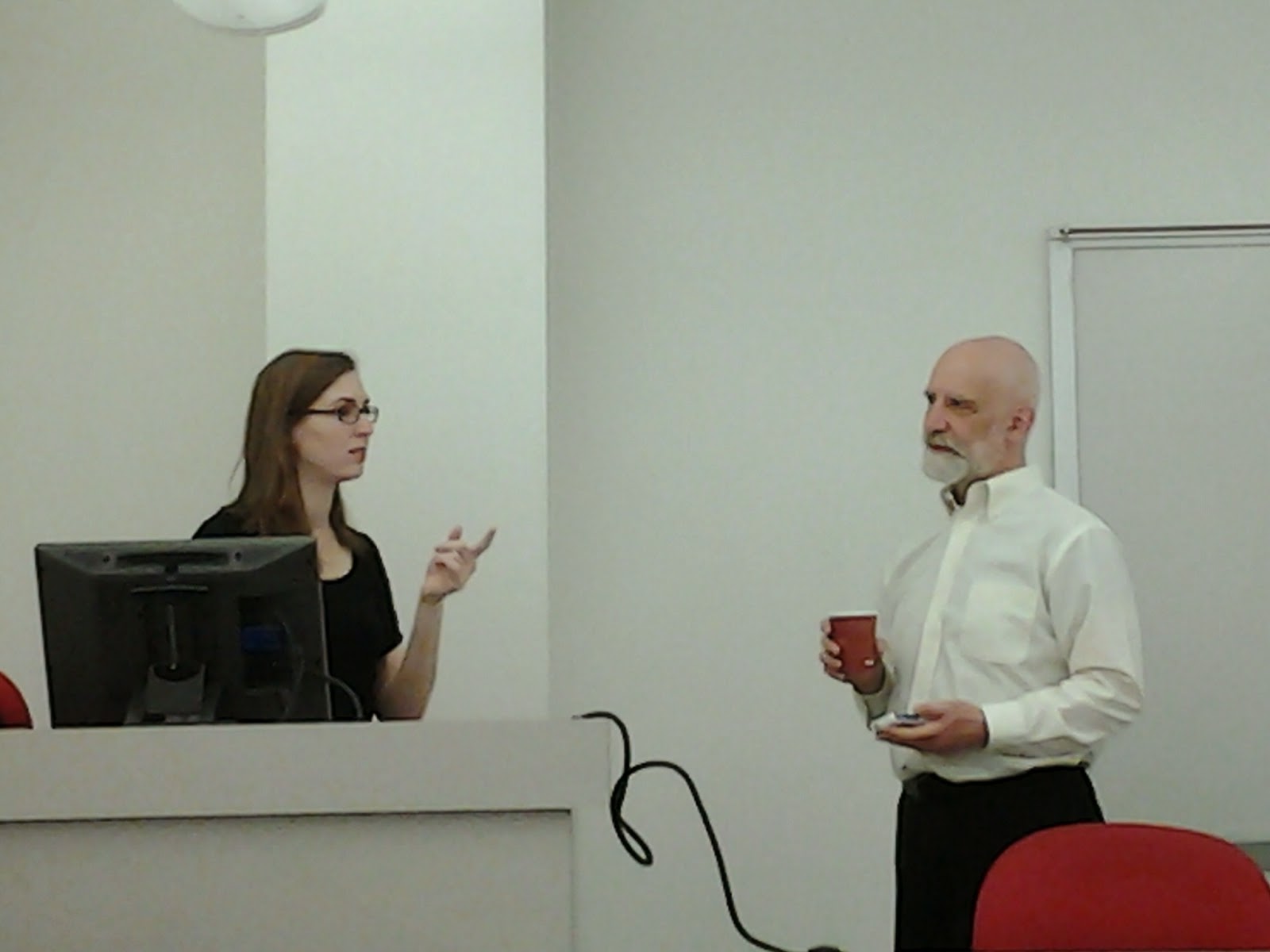 Jacqueline Gertner and Paul Spaeth chat before her talk.

Last Saturday Jacqueline Gertner presented her honors project on the Disney Studio's World War II propaganda films. Jacqueline did a top notch job exploring the role of the Disney Studios in promoting the war effort in Canada and the United States. Of course, a topic like this is both interesting in fun. With that in mind, enjoy this piece of classic propaganda....

Posted by Phillip Payne at 6:29 AM No comments:

The History Club is hosting a session to help with papers this Thursday from 7-9 p.m. in the Friedsam Library, lower level conference room. Be there or be square. This is crunch time, so take advantage of this opportunity for help with assignments.
Posted by Phillip Payne at 5:42 AM No comments:

One of Dr. Horowitz's Books Published in Argentina 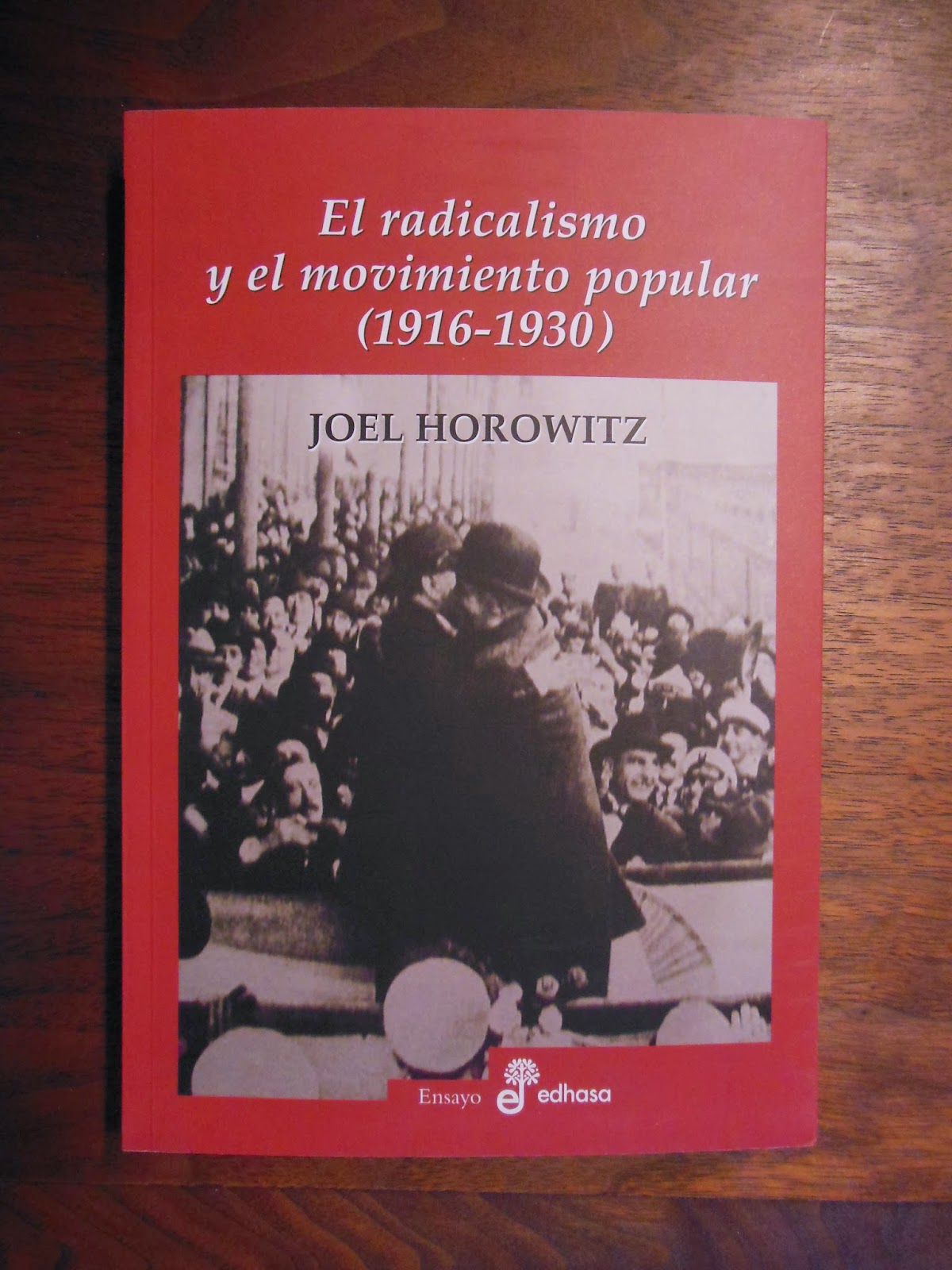 Dr. Joel Horowitz of the History Department has just had published in Argentina El radicalismo y la movilización popular (1916-1930), a book which explores the manner in which the then largest political party, the Radical Party mobilized popular support in the city of Buenos Aires. The publisher is Edhasa a major commercial press in Argentina. The book is a translation of an English language book which was published in 2008 by Pennsylvania State University Press.

In this book, Horowitz examines democracy‘s first appearance in a country that appeared to satisfy all the criteria that political developmental specialists of the 1950s and 1960s identified as crucial. This experiment lasted in Argentina from 1916 to 1930, when it ended in a military coup that left a troubled legacy for decades to come. What explains the initial success but ultimate failure of democracy during this period? According to Horowitz, a crucial element is the reaction to the way that the governing party mobilized popular backing. Horowitz does this by showing how that party forged ties with unions, and the popular classes and the backlash that this produced in certain sectors.
Posted by Maddalena Marinari at 3:53 PM No comments:

The history club is hosting a trivia night this Thursday , April 16 at 7 pm in Cafe La Verna. Dr. Horowitz is hosting (step aside Alex Trebek).
Posted by Phillip Payne at 3:50 AM No comments: