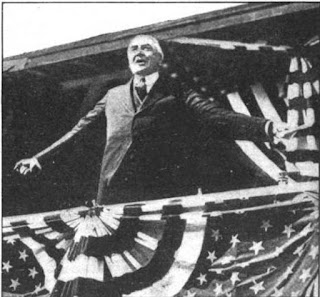 With a two-term sitting president leaving office and a large, large number scrambling to take his place, it is once again time to revisit presidential legacy and rankings.  Get ready for a lot of it.  This means Harding again reenters the historical consciousness as our worst president - maybe.  If you are going to discuss Harding in the news, you are probably going to be talking about his private life.

The New York Times reports that "DNA Is Said to Solve a Mystery of Warren Harding's Love Life."  Other outlets are widely reporting the result.  Fox News notes that first DNA testing confirmed the relationship between Thomas Jefferson and Sally Hemings and now it has answered another presidential mystery.  Do the DNA test change Harding's place in history?  Probably not.  It is not shocking or even news that Harding slept around, he was after all called a He Harlot, something I couldn't resist as a chapter title in Dead Last.  Not that long ago the Library of Congress released the correspondence between Harding and his mistress Carrie-Fulton Phillips.  The story also mentions that "The testing also found that President Harding had no ancestors from sub-Saharan Africa, answering another question that has intrigued historians. When Harding ran for president in 1920, segregationist opponents claimed he had `black blood.'"  Again, not a surprising finding  but an interesting testimony to changing times.  Some still hold it against Harding that he might have been of a mixed race ancestry.  Not that long ago the idea that Harding was of mixed race was the "shadow" in Francis Russell's Shadow of Blooming Grove, the best known and damning Harding biography.  Does all this mean Harding will now rise in the rankings?  No.  Teapot Dome and Veterans' Bureau Scandals (among others) still loom large in a short presidency.  It does show that Americans have long liked a little tabloid mixed in with presidential politics.
Posted by Phillip Payne at 5:47 AM