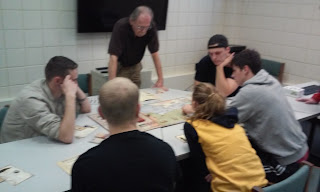 Last class an unplanned game session broke out.  We've been talking about how to match theme, content, and game design.  In particular how does one deal with potentially sensitive topics, such as slavery, in a public history project.  Also, we want to think about the richness of the Civil War and not limit ourselves to war games (not that we have anything against war games).  Dennis brought in Freedom:  The Underground Railroad (click here for an interview with the designer) to show the class how one educational game designer had dealt with it in a cooperative game.  Once the game was explained, the next logical step was .... well, to play it. 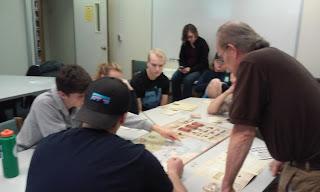