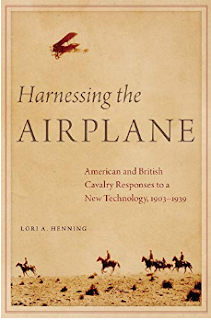 Dr. Lori Henning, new to our history department, has a new book.  Harnessing the Airplane is published by the University of Oklahoma Press.  Her research is timely and important.

From the description from the University of Oklahoma Press:  At its dawn in the early twentieth century the new technology of aviation posed a crucial question to American and British cavalry:  what do we do with the airplane?  Lacking the hindsight of historical perspective, cavalry planners based their decisions on incomplete information.  Harnessing the Airplane compares how the American and British armies dealt with this unique challenge.  A multilayered look at a critical aspect of modern industrial warfare, this book examines the ramifications of technological innovation and its role in the fraught relationship that developed between traditional ground units and emerging air forces.

"Lori Henning demonstrates that not all who oppose new developments are opposed to the technology that drives them.  Harnessing the Airplane is an intriguing work that will appeal to anyone interested in the history of air power, the cavalry, and science and technology."  Brian D. Laslie, author of Architect of Air Power:  General Laurence S. Kuter and the Birth of the US Air Force.