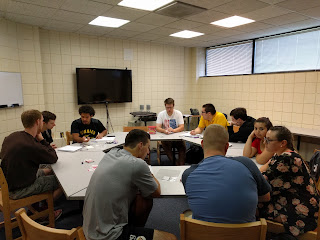 Students enrolled in the Intro to Public History course are taking their first crack at designing a game.  Having looked at some design and organizational techniques and played some games to see those ideas in practice, they get to break into teams and create.  To see how history (theme) and games (design) could merge, they played Tesla v. Edison, The Grizzled, and Freedom: The Underground Railroad.  Thier first task is to create a simple card game.  Later, we'll add some history content from the archives.
Posted by Phillip Payne at 11:42 AM No comments:


The History Club will be having a general interest meeting this Wednesday September 13, at 7 PM in Plassmann 201. We will be discussing events for the year, meeting times for the rest of the semester, as well as our off-campus trip location. The History Club is open to both History majors and non-majors and we welcome the input of all involved. Come and see what the History Club is all about!
Posted by Phillip Payne at 7:40 AM No comments:


Our new faculty member joining us this fall.


Steven Pitt earned his Ph.D. from the University of Pittsburgh in 2015. He specializes in teaching Maritime, Atlantic, and Early American History but has also taught courses in 20th Century U.S., World, European, and Environmental History. He is the author of two peered-reviewed articles on seafaring and ship building in colonial Boston entitled, “Cotton Mather and Boston’s ‘Seafaring Tribe,’” New England Quarterly 85.2 (June 2012) and “Building and Outfitting Ships in Colonial Boston,” Early American Studies 13.4 (Fall 2015): 881–907. He is currently working on a book manuscript that details the harrowing experience of colonial American seafarers in the Atlantic logwood (dyewood) trade on the Yucatan Peninsula. In the harsh, alligator-infested lagoons, they confronted threats ranging from pirates, the Spanish Empire, and endemic warfare to shipwrecks, hurricanes, and mosquito-borne diseases. Outside of work, Steven enjoys spending time with his wife, Julia and their two children, Annabelle and Josiah, as well as nature photography/hiking, skiing, and more recently, woodworking.
Posted by Phillip Payne at 12:33 PM No comments: