This past semester, I have been experimenting with a course that combines computer/video games with history. Students have played an array of historically-themed games from the popular Assassin's Creed series to strategy games like Civilization 5. Students have written blog posts about the course games, researched and presented on unassigned games, and are developing their own hypothetical "dream" historically-themed game by doing historical research and incorporating game design and mechanics. As a class, we constantly seek elements of game-play that are factual and educational, as well as questioning when developers go beyond the realm of history into fiction. For more information about the course and links to student blog posts see the course website: https://spitt9.wixsite.com/historythroughgaming).

The class has also benefited greatly from St. Bonaventure University's new eSports Club, the officers of which generously invited us to use their gaming room. Without this offer, teaching games like Assassin's Creed: Odyssey, Battlefield I, and Call of Duty: WWII, would have been impossible.

This past academic year, History Club had a blast visiting Old Fort Niagara, the Buffalo Zoo, and the Theodore Roosevelt Inaugural Site.

Our first trip in November 2018 took us to Old Fort Niagara where we learned about the French construction of the fort in the late seventeenth century and the imperial contests that eventually led to the British conquest during the French and Indian War in 1759. Jacob Keenan served as an excellent tour guide, sharing his inside knowledge about the fort and life as a soldier in colonial America.

Our second adventure took us back to the late nineteenth and early twentieth centuries when zoos and world's fairs became popularized in Europe and the United States. First, we went the Buffalo Zoo. Built in 1875, the Buffalo Zoo is the third oldest in the United States. Students enjoyed seeing the lions, tigers, and bears but Ashley's passion for turtles became a group quest to find the shy reptiles. After a fantastic lunch at a Mexican restaurant, we went to the Theodore Roosevelt Inaugural Site where Theodore Roosevelt was sworn into office after the assassination of President William McKinley at Buffalo's Pan-American Exposition in 1901. We learned a great deal about McKinley's assassination and Roosevelt's swearing in, including the story of Roosevelt's harrowing trip from the Adirondack's, where he was in the midst of climbing Mt. Marcy when he learned of McKinley's dire situation, to Buffalo.

Professor Dalton is offering World Cinema next semester as a special topics course.  This will be an interesting look at films beyond Hollywood.

Posted by Phillip Payne at 6:58 AM No comments:

Dr. Henning is offering a new European military history course in the fall.  Check it out.  It is listed as a special topics course.

Posted by Phillip Payne at 12:51 PM No comments:

Dr. Andrew Roth spoke yesterday to a group of mostly students on America's story and the culture wars.  Dr. Roth is the former interim president of SBU and president-emeritus of Notre Dame College.  He is currently at the Jefferson Educational Society in Erie, PA. 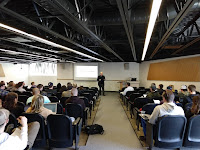 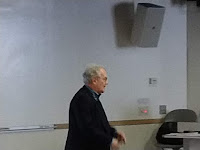 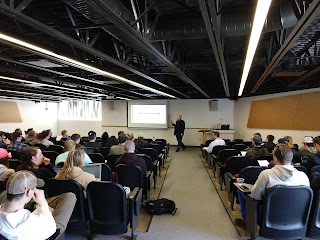 Posted by Phillip Payne at 6:34 AM No comments: